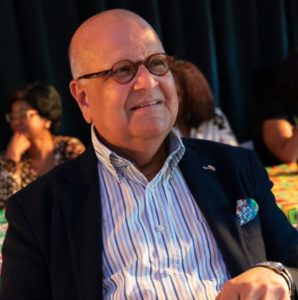 Bio-sketch of Dr. Harold E. Robles
(at the end of this page you will find the Dutch translation)

In 1973, Robles founded the Albert Schweitzer Center in the Netherlands. Two years later, he was appointed Secretary General of the International Schweitzer Organization (ASIL), an organization founded by Dr. Schweitzer in the 1930’s in Strasbourg, France.

In 1981, Robles immigrated to the United States where he founded together with Rhena Schweitzer Miller, the daughter of Dr. Schweitzer, the Albert Schweitzer Institute for the Humanities (ASIH); an organization dedicated to the philosophy of Albert Schweitzer. In 1998, at the age of fifty, he retired from the Institute and was given the title President Emeritus.

In 1999, dr. Robles founded the Medical Knowledge Institute Trust, an International non-profit organization that focuses on education and providing information from the conviction that healthcare is a human right. In 2013 he and the trustees changed the name into Health Promotion South Africa Trust (HPSA). Robles and his co-founder Dr. Jelle Braaksma were appointed special advisors to the Trust.

In November 2016 just before leaving the White House President Obama honored HPSA with his endorsement.

For his work, Robles received numerous awards. In 1996 Albert Magnus College in New Haven Connecticut, USA honored him with an honorary degree in Human Letters for his humanitarian work. In 1998 the Polish Academy of Health honored him with their International Gold Star “Merit for Humanism”.

On World AIDS day 2009 dr. Robles received from Michael Sidibe, Executive Director of UNAIDS an award for his humanitarian efforts in the field of HIV/AIDS. This award is granted annually by the ‘Africa Centre for HIV/AIDS Management’, at Stellenbosch University.

On the 29th of April 2009 Queen Beatrix of the Netherlands granted dr. Robles a Knighthood, “Ridder in de Orde van Oranje Nassau”.

Legacy International honored dr. Robles with its International Humanitarian Award which he received at Virginia Tech University in Blacksburg, Virginia on January 11th 2010.

In 2011, Robles was appointed by the court in the Netherlands Extraordinary Officer, (Justice of the Peace)

In 2012 the George Washington University, School of Public Health appointed him Professorial Lecturer in Prevention and Community Health.

Nominated by the South African Ambassador to the Kingdom of the Netherlands, Robles was named “Outstanding African Personality for Health Advocacy 2012”.

It was a great honor for Harold Robles to be one of the 500 invited Dutch citizen to attend the coronation of King Willem-Alexander of the Netherlands, on the 30th of April 2013 in Amsterdam.